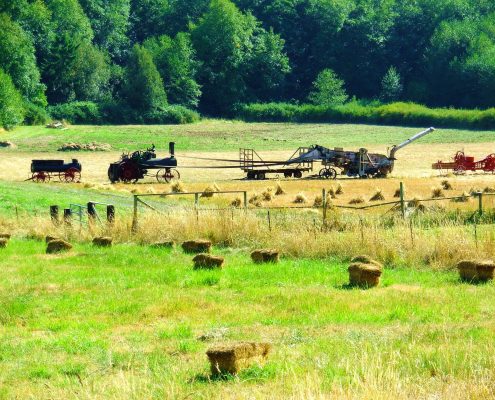 In 1984-85, Sandy Bishop and I were walking 5000 miles across the United States for peace. When we entered Missouri, we found out that 89 farmers in one year in Missouri alone had committed suicide. We were stunned. I was raised in rural Iowa in the 50’s and 60’s and visited many of my classmates on their family farms. Agri-business had not yet gained a foothold, but shortly after I left home, the corporate takeover began. Whoever controls a nation’s food controls the nation. The balance of power in rural America took a steep dive from family owned farms to corporate controlled farms.

As we walked vacant streets through one boarded up rural town after another, we saw the consequences of the corporate takeover. As a daughter of a rural preacher, I was raised on church potlucks. I remember eating local food at these potlucks— homemade chicken or beef and noodles, pan-fried chicken, green beans from the garden, fresh creamed peas and yes, Jello salads, because this tradition was a status symbol. It meant you had refrigeration.

As a child I visited my friends’ farms. We checked out the chickens, pigs, and small dairy herds. There was corn, alfalfa, and wheat in the fields. Someone was always home, and always willing to stop and chat. We spent our daylight hours roaming the fields and streams, never thinking to worry about pesticides, though chemical fertilizers were starting to appear. Soybeans had not yet become the primary mono-crop.

By the time of our walk in 1984-85 the potluck dinners were comprised of KFC, practically no vegetables, baked beans, and still the Jello salads. The fields consisted of corn and soybeans. Hogs, chickens and dairy cows were confined inside giant warehouses. There were no longer farm families raising a variety of crops and livestock. It was only the biggest farmers who had any dairy cows. No one was home on the smaller farmsteads because they were working on someone else’s farm or in town.

Now most of the farmland is owned by a very few. Keep in mind that according to American Farmland Trust, 3 acres of farmland is lost every minute in US.

The ten largest landowners in the U.S. are cable billionaire John Malone, media mogul Ted Turner, the Emmerson lumber producing family, billionaire Brad Kelly, the Reed foresting family, billionnaire Irving, Singleton cattle ranching family, King ranching family, sports magnate Stan Kroenke, and the David Pingree family. Thirty percent (30%) of America’s farmland is owned by non-farmers. Between 2004 and 2014—the latest decade covered by the USDA data—foreign ownership of American farmland has doubled to 27.3 million acres. Why is America’s land, including farmland, owned this way? Farmland has become a natural resource for investors—not to feed America, but as a commodity in the world’s financial markets. Does whoever owns the nation’s food own the nation?

Today, “the suicide rate among white male agriculture workers, according to the Centers for Disease Control, is now 50 percent higher than it was during the shocking peak of the 1980’s crisis. In fact, in 17 states people who work in agriculture are killing themselves at a rate five times greater than the general population.”

In the islands, we are not dealing with farmer suicide, but like the rest of the country, we are dealing with the loss of farms and farmers, yet a resurgence of interest in access to healthy local food. With the average age of a farmer in the County being 62 years of age, there is a great need for farming succession in the islands, which means there is a demand for new farmers to take over and care for the existing farmland. There is one more systemic factor in the farmland crisis specific to the islands. The natural beauty of the area attracts landowners seeking a climate-safe, beautiful place to live. With the spiraling costs of land, new farmers are unable to purchase at the price the market demands. These new farmers are forced to compete with those who would just as soon buy farms at the inflated costs and use them as private estates or hobby farms.

Should retiring farmstead owners wish to have their farm continue to be farmed, there is no guarantee that the tenant farmer can live on the farm due to a lack of housing or appropriate land use zoning. Moreover, we are now approximately two generations removed from most active farmers. Farmers a generation behind came to farming as a second career, and are still considered “beginning farmers.” Farmers who were raised on a family farm, or in a community where their parents’ friends farmed, is rare. This means that the mentoring so necessary for new farmers of more than a three acre specialty market garden does not exist in practice.

Retiring farmers are reluctant to have their farms cared for by “greenhorns.” Even if a qualified farmer takes over the farmstead, there will likely be differences in how to farm, and this becomes emotionally difficult for the retiring farmer. For farmstead owners that are not farmers, there is a reluctance on the part of the owners to provide adequate infrastructure that is necessary for farming. Basic infrastructure for farming is expensive, but the capital investment benefits the landowner, usually not the tenant farmers. This includes fencing, ponds, barns and sheds. Beginning farmers often do not have access to loans for capital investments, much less loans for infrastructure that would stay with the landowner, not themselves. These new farmers don’t own the land necessary to secure the loan.

In his book The Shepherds Life, John Rebanks shares his concern about losing the “cultural landscape” of his farming country. He speaks of the importance of sharing not only the beauty of a region with tourists, but also the cultural landscape of its inhabitants, particularly farmers. He states that the loss of farming is an issue not just for the landscape, but for the communities themselves. For instance, “in the valleys of Norway they are trying to encourage people to farm again in some places because the character of those places alters without it.”

All in all, these obstacles to farming in the islands are daunting. People will tell us that succession of small farms can’t be done, but just as we have been told about most everything else, islanders are known to accomplish the impossible. We understand the importance of controlling our own lives and shaping our own destiny. The islands have a mobile processing unit, a rural medical clinic, award-winning libraries, farm to school programs, affordable housing, and on we go.  We now need to address this farming issue at all levels in all arenas, because we can’t afford to do nothing.

As a society we need to care enough to change the trajectory of agriculture in this country. Danny Duncan Collum states in “A Wound That Still Bleeds,” (Sojourners, March 2018. p. 38,) “If we are ever going to have a healthy society, much less a just one, we will need to use the power of government to create a system of subsidies an incentives that allow people to make a reasonable, honorable, and sustainable living on the land, growing food products that we actually need. And we better do it soon….”

In the words of Brenda Shoepp, “My grandfather used to say that once in your life you need a doctor, a lawyer, a policeman, and a preacher, but every day, three times a day, you need a farmer.” I’m with her.