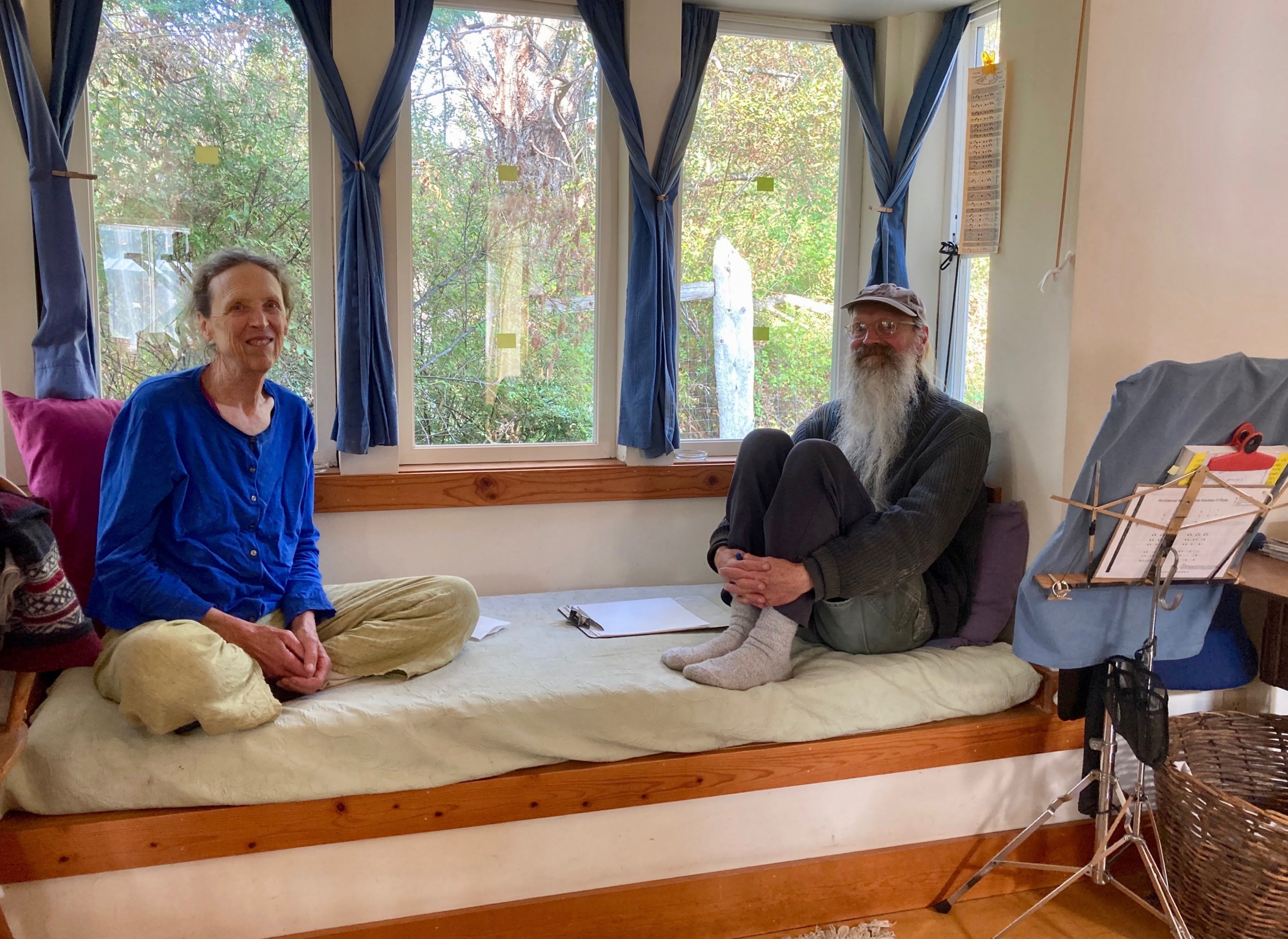 Ona & Neil at their home in Morgantown

Morgantown, Lopez Community Land Trust’s first permanently affordable housing cooperative, is celebrating its 30th anniversary. I recently sat down with Ona and Neil, homeowners and co-op members, who were part of the original cohort from 1992 to hear about their experiences. Ona gave me a tour of their house, a sweet two-story building with high ceilings, an open loft, and cozy living room complete with a window seat. On the dining room table, Ona and Neil had laid out a series of photographs from the early 1990s when LCLT was first forming and Morgantown was under construction.

“It was a really exciting time,” Ona said. She pointed to one of the photos on the table, where she and Helen Ludwig were standing next to a handmade sign that said Planting the Seeds of Land Reform. “The whole CLT model seemed really amazing and perfect. That’s part of why I made my visionary sign. I went to the national conference [hosted by the Institute of Community Economics] in Vermont and it was very exciting to be part of it. For me, the land trust model just seemed so beautiful.” 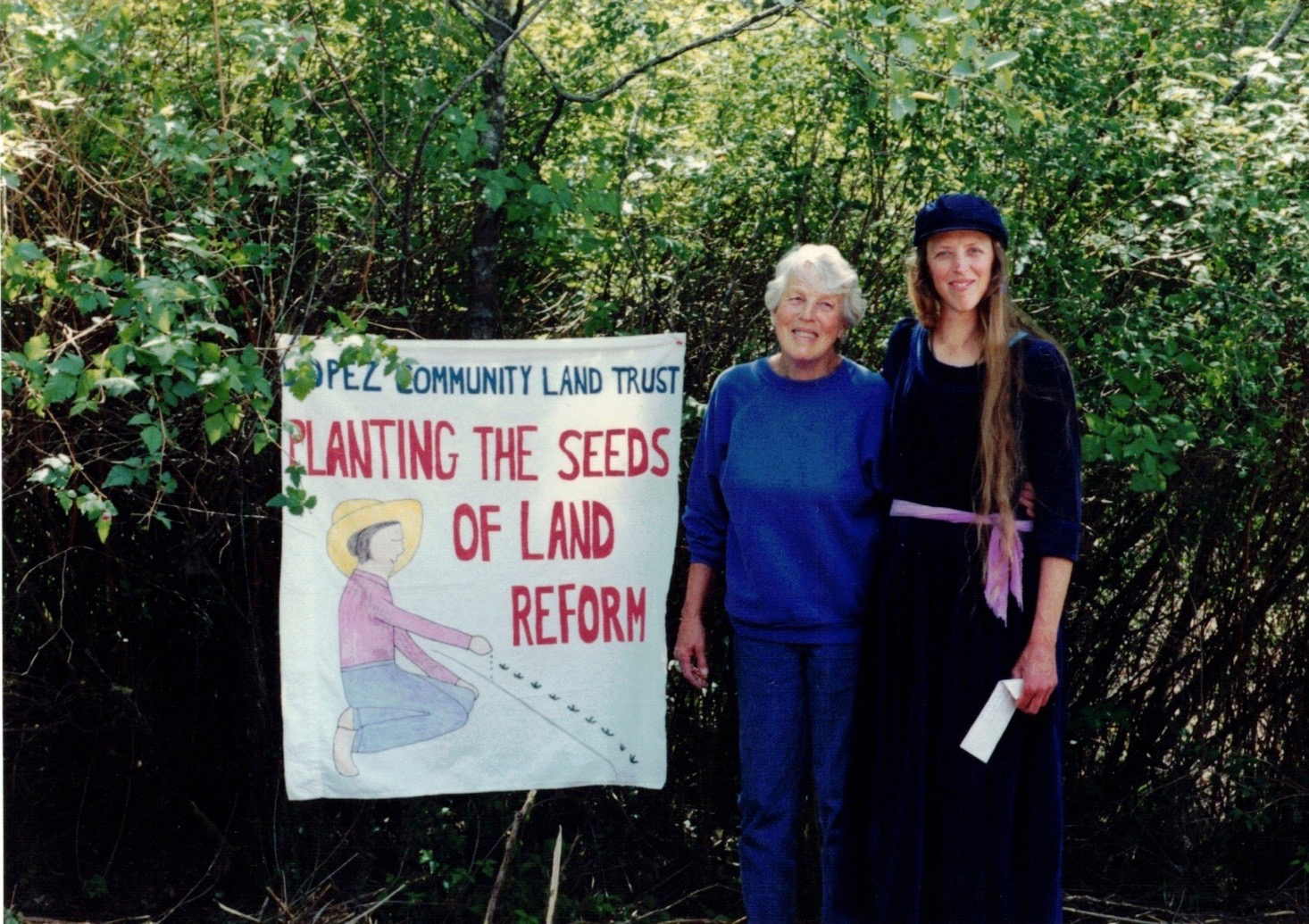 “Another aspect of why it was so exciting is that the whole financial picture was laid out very clearly” Neil added, “and we could see that this was in the realm of possibility for us. At the time, I felt like I was in a dead-end job, not knowing what the future would bring, and wondered how I would ever afford a home on Lopez Island. But when the CLT model was explained, it made me think — we could do this!”

“And I loved the whole idea of taking homeownership out of the commodity market,” Ona chimed in, “because everyone could see where that was going, and that’s where we are today – just insanity.”

Neil described that “we all really needed housing. Before moving into the Land Trust, we were living in a friend’s barn on Hooterville. I remember there was a question in our application, something like ‘how stable is your current living situation?’ and I answered, ‘Well, the only thing stable about it, is that it used to be a stable – for horses!”

As the first LCLT project, Morgantown wasn’t without challenge. Neil explained, “Our being the first project, we were blindsided by so many things that came up, so it was a little bumpy. When these houses were built, we didn’t even have a full complement of tools to work with. But people in the community came forward with saws, and table saws, and concrete tools. It reminded me at the time of an Amish barn raising. There was food provided and all kinds of stuff. Sometimes people would just be driving by and they’d stop and ask what was going on, then pick up a shovel and dig a footer drain. It was pretty amazing.” 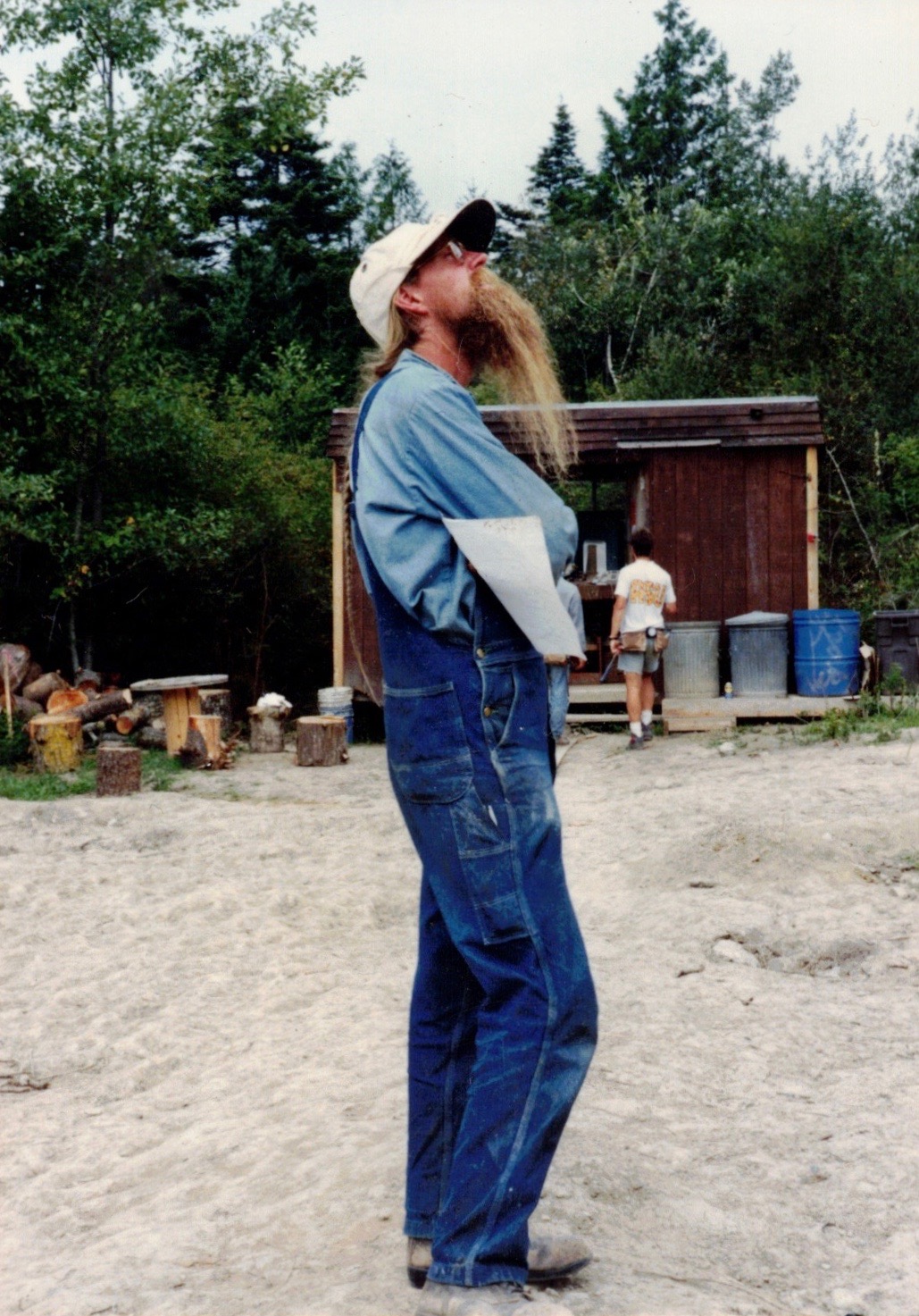 Neil during the Morgantown Construction

Throughout all of LCLT’s developments homeowners, interns, and volunteers participate in the building process. In doing so, they learn many skills, bond as a co-op and truly know the ins and outs of their houses. This experience alone has had lasting impacts. For Neil, “Starting out working for public works, there were a lot of skills that carried over. I think the biggest benefit was just the confidence I had. Not really having many construction skills or mechanical skills when first building our house, but being required to just take on any challenge that came up, I gained confidence that I didn’t have before. It kind of gave me a sense of being unlimited in what I could do and that carried over at the dump.” Ona and Neil Co-founded the Take It or Leave It (TIOLI) on Lopez.

For Ona, “I think it’s been very important for us to have been part of this [original] group. Like the other day, nobody could find the entrance to the water going into one of the homes. And I was like, ‘I remember! I dug a hole there to fix a leak.’ I feel like it’s an important historical memory.”

Most affordable housing in the United States doesn’t allow for this historical memory, as it is typically linked to a 30-year expiration policy. In contrast, all LCLT housing co-ops, including Morgantown, have a renewable 99-year ground lease. This guarantees that the land will be used for affordable housing for 198 years, and that residents have security of tenancy.

“There’s a lot to be worked out with a 99-year lease! And that’s a beautiful aspect of this,” Ona said. “We’re also very involved with the business of the co-op. I still think it’s basically a good model. All the interpersonal challenges here have definitely made me learn and grow about human relationships.”

Neal pointed out one benefit of living in close community: “I think our co-op is more prepared for calamity than the average neighborhood on Lopez. Just because of all of our work together. We know where the fire extinguishers are, where the water is, who has propane that needs to be turned off. We know a bunch of things others wouldn’t know about their neighbors.” He also shared what he sees as important for the future: “I want to mention our operating documents. Without them, we’d really be in trouble. One thing that needs to be emphasized more is maintenance. We need to have a comprehensive calendar of maintenance tasks or something.” 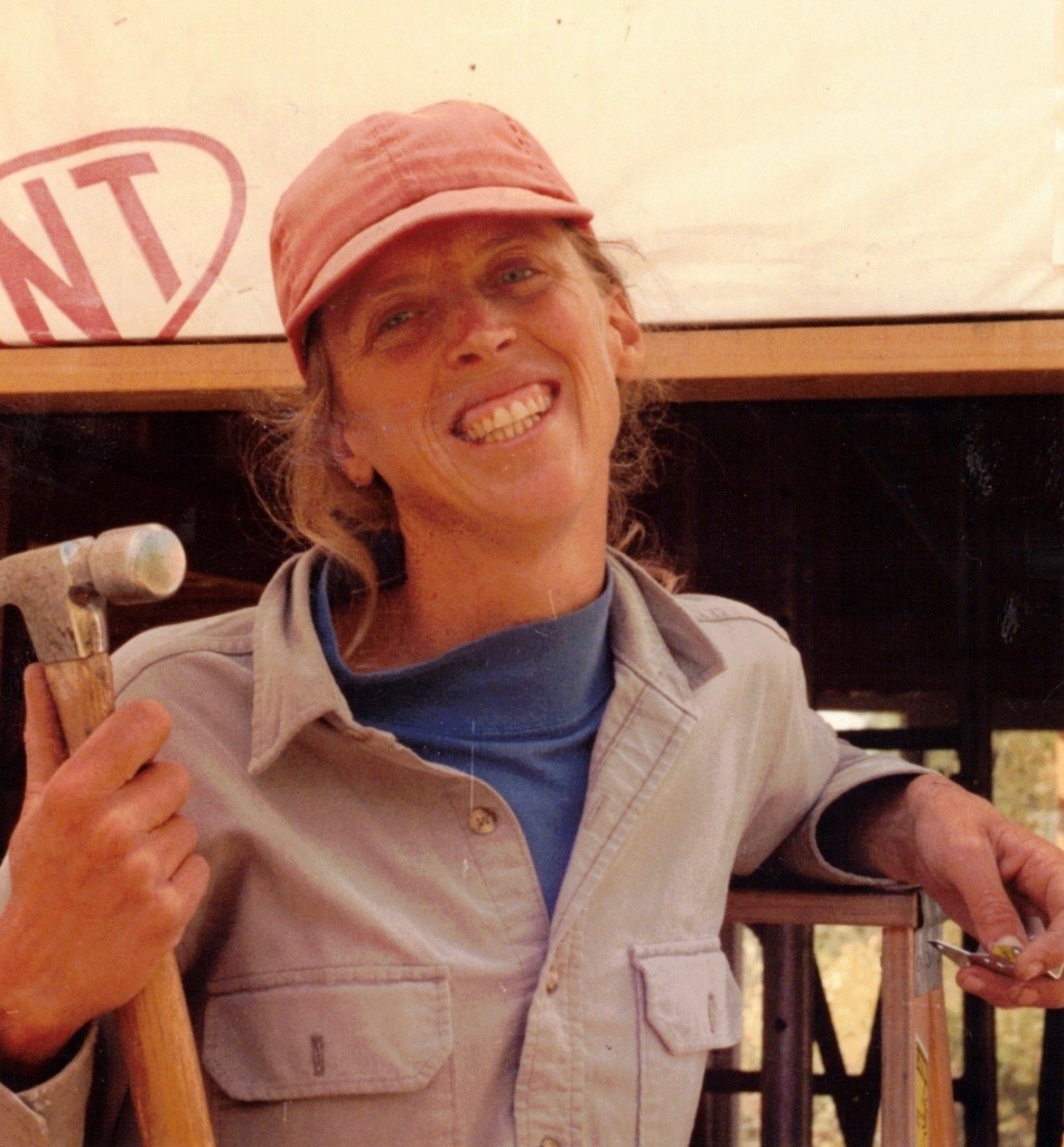 Ona in 1992 during the construction of Morgantown

Before leaving, I asked about the long-term impacts of homeownership, and Ona responded: “I thought at one period I wanted to leave Lopez and find an intentional community and I read that the average turn over in intentional communities is 8 years. On Lopez, I have these relationships that go on for more than 40 years, from before I even moved here. How precious is that? The Land Trust nurtures that kind of connection by making a place for people. We consider ourselves very fortunate to live in the village. The dentist is just down the road, Blossom is across the street, I have a garden a few blocks from here. Now we think about becoming old people and that’s something we weren’t thinking a lot about. But we’ve always felt that this is our home and that this would be our home until we died. Even though there’s been challenging times, that’s continued to be a baseline. And we no longer think of moving. I feel very grateful that we have a good place for growing old.”

Today, Lopez Community Land Trust provides housing to over a hundred Lopezians who contribute to our island in tangible and meaningful ways. If you’d like to learn more about LCLT and support permanently affordable housing opportunities, explore our website, subscribe to our newsletter, or donate here. 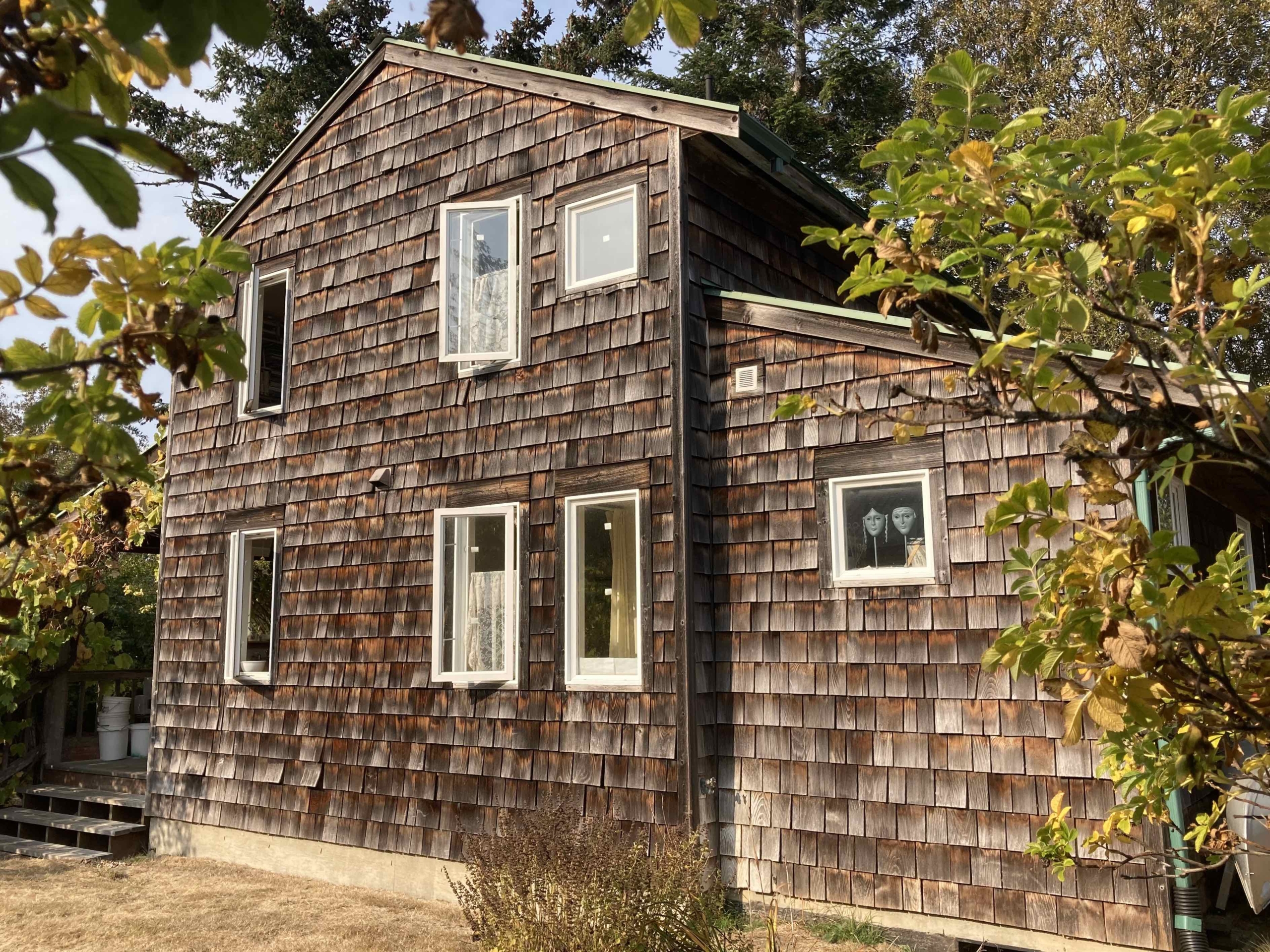